The story involves a cursed book called the Grimoire in which the story of the evil citadel Castlevania is recorded. However, the castle comes to life within the pages of the book, taking various forms from previous incarnations, and the heroes of the past –also recorded in the book and coming to life within its pages– must once again fight to put an end to the curse. This story allows characters from different eras to come together in the same castle to fight evil.

On February 2, 2011, the fifth and final downloadable pack for the game was released, titled The Legend of Fuma. As its name suggests, it contains levels, enemies, bosses, items and music directly from the 1987 Konami game GetsuFumaDen (in all their 8-bit sprites glory).

In addition, Getsu Fuma, the main protagonist of GetsuFumaDen, is also available as a playable character on a separate DLC. 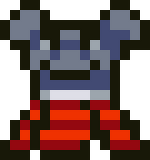 Getsu Fuma is a downloadable playable character in this game.
Add a photo to this gallery

Retrieved from "https://getsufumaden.fandom.com/wiki/Castlevania:_Harmony_of_Despair?oldid=4427"
Community content is available under CC-BY-SA unless otherwise noted.