Dokugandokuzu (独眼独頭 (どくがんどくず)?) is an enemy character in the GetsuFumaDen series. He was introduced as one of the Majins (bosses) of the 1987 game GetsuFumaDen and since then he has made several cameo appearances in many other Konami products.

A demon in the form of a gigantic decapitated skull of a cyclops wearing a classic Oriental battle helmet. He floats about and attacks any intruders that dare to enter his domains.

First appearance of Dokugandokuzu in any media. He is one of Ryukotsuki's three Majins, and as such, the latter commended him one of the three legendary Hadou katanas he stole from the Getsu brothers to guard it.

When Fuma first enters his chamber, he'll be welcomed by nothing but darkness and emptiness; however, soon enough a myriad of skulls will start raining from above and from their source One Eye One Head will materialize into the room.

Dokugandokuzu will then start to endlessly move from one end of the screen to the other in an undulating manner. Every time he closes his eye and mouth, he'll spew a fireball directly at Fuma's current position. When touching the floor, the flames will remain for a short while until they extinguish.

Every time Dokugandokuzu is hit, he will stagger a little and remain in place for a split second, allowing the player to deal subsequent hits before he manages to break free. The player is then advised to keep a medium distance from him, try to hit him every time he's at the lowest height of his swoop, and keep hitting him as much as possible before he escapes.

For a boss, Dokugandokuzu is not remarkably resilient and it won't take long before he subdues to Fuma's blade, yielding with this the Hadou katana he had in his possession.

Dokugandokuzu appears as a guest enemy in this Konami mascots crossover game.

Renamed "Decapiclops" in this game, he is one of the guest enemy characters included in the downloadable Chapter 11, The Legend of Fuma. He is one of three sub-bosses that must be defeated before reaching the final boss, Ryukotsuki.

Decapiclops becomes more powerful after either of the other two sub-bosses, Oxocutioner and Chimyriad, are destroyed. He can also be summoned by Ryukotsuki during the final boss fight. 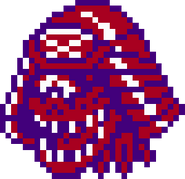 Dokugandokuzu "Miss" animation from pop'n music 18.
Add a photo to this gallery

Retrieved from "https://getsufumaden.fandom.com/wiki/Dokugandokuzu?oldid=4457"
Community content is available under CC-BY-SA unless otherwise noted.