This article is about the 1987 Famicom game. For the entire franchise, see GetsuFumaDen (series).

GetsuFumaDen (月風魔伝?, lit. "Legend of Fūma Getsu") is a 1987 action-adventure, role playing, platformer game by Konami for the Famicom console. It was released in July 7, 1987 in Japan only. The game stars starring Getsu Fūma on his journey to the depths of Hell to fight demons and avenge the deaths of his brothers.

While this game had no sequel for a long time, several GetsuFumaDen-based stages appeared in other Konami games. These stages are set in Hell and appear in Konami Wai Wai World, Wai Wai World 2: SOS!! Parsley Castle and Castlevania: Harmony of Despair.

A sequel to this game was finally announced in 2021, 34 years after the original game, called GetsuFumaDen: Undying Moon for PC (Steam) and Nintendo Switch. The original GetsuFumaDen game (along with other perks) will be included to users who buy the Early Access version.

Hadou katana - A spiritual blade which once swung, releases a wave of energy delivering damage to the enemies. With the three Hadou katanas together, they can release a much powerful attack called the Dainendōha (大念動波?, lit. "Great Will Aura").

However, Ryukotsuki attacked and killed the two eldest out of the three brothers, stole the three Hadou katanas and handed them over to the Majins who ruled an island known as Kyōki-tō (狂鬼島?, lit. "Raging Demon Island"). Fuma, the youngest brother who survived, whose grief over the loss of his two older brothers eventually turned into rage, swore revenge against Ryukotsuki. Knowing he cannot defeat Ryukotsuki without the Hadou katanas, let alone without the powerful Dainendōha, he goes on a quest to Kyōki-tō, where Ryukotsuki and his three Majins reside, to take back the family treasures and defeat the Demon Lord.

Now, go Fuma; defeat Ryukotsuki, and bring peace to the souls of your brothers who died in vain!!!

The game is structurally similar to Castlevania II: Simon's Quest and The Goonies II; the player controls Fūma, whose goal is to locate the three Hadou katanas that have been stolen from his clan in order to gain access to Ryūkotsuki's lair. Each of the Hadou katanas have been hidden away in the three neighboring islands surrounding Raging Demon, which are Kigan-tō (鬼願島?, "Ogre Head Island"), Gokumon-tō (獄門島?, "Prison Gate Island") and Mitsukubi-tō (三首島?, "Three Necks Island"). Each of these islands requires Fūma to be in possession of a different Demon Face (鬼面符, Kimenfu?).

The game starts off from an overhead view where the player guides Fūma to his next destination. When Fūma enters torii (a gate), the game switches to a side-scrolling action scene where the player must go from one end of the area to the next while fending off enemies and avoiding pitfalls in order to return to the main field and proceed to the next scene. In addition to these action scenes, there are also small hokora (shrines) featuring villagers who will provide hints to Fūma (and some also heal him) and shops where he can purchase new items and weapons using the money he has accumulated from defeated enemies. The player switches items by pausing the game during an action sequence and then pressing A to select a defensive item or B to change weapons. Experience points are accumulated by defeating enemies, which will fill out Fūma's sword gauge, increasing the strength of his attacks.

When the player reaches the main dungeon in each of the islands, the game switches to a pseudo-3D perspective which follows Fūma from behind. The player must proceed through a labyrinth in order to reach the boss holding one of the Hadou katanas. Each labyrinth is filled with numerous enemies who will confront Fūma, along with allies who will provide him with hints and helpful items. A candle is required to light these labyrinths, as well as a compass which shows Fūma's current direction. When the player reaches the boss's lair, the game switches back to a side-scrolling perspective before the actual confrontation.

The game uses a lives system like most action games. The player loses a life when he runs out of health or falls into a pitfall. When the player runs out of lives, he can continue from where he left off or quit and resume at a later point using a password. The player is penalized by having his money reduced by half.

GetsuFumaDen's box is rather unique, in that it features a lenticular panel on the front that displays two different images when held at different viewing angles.

Like several other early Konami games released in the 1980s-1990s, GetsuFumaDen included a numbered collector card set, known in Japan as Konami Chara Cards. Each card featured an illustration or a snapshot of the game, and the back of each card showed a serial number, as well as the game's title. They were randomly included with the games. 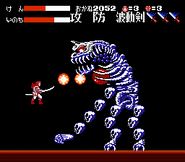 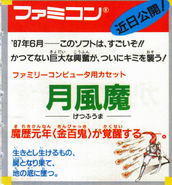 GetsuFumaDen advert on the instruction booklets of Ai Senshi Nicol and Meikyū Jiin Dababa.
Add a photo to this gallery 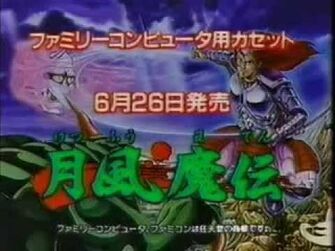 Retrieved from "https://getsufumaden.fandom.com/wiki/GetsuFumaDen?oldid=5032"
Community content is available under CC-BY-SA unless otherwise noted.