WARNING!
This article contains spoilers. Proceed at your own risk.

Getsu Fuma (月風魔 （げつ ふうま）, Getsu Fūma?, lit. "Moon Wind Demon") (also spelled Getsu Fuuma or Getsu Fuhma; written in Western Order as "Fūma Getsu") is the protagonist of the 1987 Famicom game GetsuFumaDen. An honorable warrior member of the ancestral Getsu Clan and heir of one of the three Hadou katanas, mystical swords with supernatural powers. He journeys to the depths of Hell to avenge the deaths of his brothers.

In the year 14672 A.D., the first year from the "Demon Age", from the depths of Hell the Demon Lord Ryukotsuki awakened and sought to conquer the mortal realm governed by the three Getsu brothers.

With the knowledge passed down from generations, as well as their family's heirloom treasure weapons, the Hadou katanas, the Three Getsu Brothers faced Ryukotsuki. Unfortunately, Ryukotsuki managed to defeat and kill the two eldest brothers. They then stole the three Hadou katanas and handed them over to their three Majins, who ruled the hellish island of Raging Demon.

The Hadou katanas held a secret power within them: When all three spiritual swords were reunited, they gained the ability to unleash a devastating attack known as the Dainendōha.

Fuma, managed to survive the attack, though, and the grief he felt over the loss of his two older brothers eventually turned into rage and swore revenge against Ryukotsuki.

Nevertheless, knowing that he wouldn't be able to defeat Ryukotsuki without the Hadou katanas –let alone without the powerful Dainendōha– he journeyed to the the Raging Demon Island, where Ryukotsuki and their three Majins resided, on a quest to retrieve his family's heirloom treasure blades.

He succeeded in this task - slaying each of the dreadful Majins and retrieving the blade each one had. Once he collected the last one, he challenged Ryukotsuki in a final battle and ultimately succeeded in slaying the Demon Lord by summoning the spirits of his two brothers and conjuring the Dainendōha, avenging with his death the memory of his family.

Fuma reappears in a minor role in GetsuFumaDen: Undying Moon, which takes place a millennium after the first game. He is found at the end of the Ancient Battleground, at the entrance of Cocytus, the final area of the game. 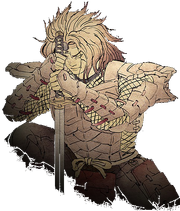 According to the digital artbook that came with the game, when Fuma failed to return from Hell, the 2nd Getsu leader descended there as well in search of him; however, Fuma refused to send his soul back to the Estate in order to make sure that the seal to Cocytus remained undisturbed; so he stayed there, vigilant, for an entire millennium.

It is implied that Rando, in his search to become the clan's leader, attempted to take the Hadou katana from Fuma's petrified fingers and that it was this act what weakened and eventually broke the seal, unleashing the current cataclysm and releasing the Ryukotsuki and other denizens of the netherworld.

Proper for a warrior that hails from a world inspired after folkloric and mythological Oriental themes which pay homage to Japan's classic medieval era, Fuma wears apparel that is heavily inspired by the traditional samurai armor, consisting of a metal cuirass featuring the face of a demon and which is complemented by vambrace and gauntlets made of the same material, red fauld and cuisse worn over purple colored poleyn (pants), metal greaves and a golden diadem worn on the head which features an oval-shaped, blue gem.

One of Fuma's most prominent features, however, is his long, red hair, which is reminiscent of those often seen on traditional kabuki actors, notorious for being very long, abundant and used in a loose style that usually covers a large portion of the body.

Fuma retained this aspect along most of his cameo appearances in other Konami games, with only small changes between them.

Fuma is a fierce warrior with great strength and speed. His main weapon is the sword, although he can also acquire secondary weapons after buying them in stores.

He possesses the following abilities and weaponry:

Although for many years there were no sequels made to GetsuFumaDen, Fuma has made cameo appearances in several other Konami products: