Getsu Fuma (月風魔 （げつ ふうま）, Getsu Fūma?, lit. "Moon Wind Demon") (also spelled Getsu Fuuma or Getsu Fuhma; written in Western Order as "Fūma Getsu") is the protagonist of the 2021 game GetsuFumaDen: Undying Moon. An honorable warrior member of the ancestral Getsu Clan and descendant of the first Fuma, who a millennium ago defeated and sealed the evil Demon Lord Ryukotsuki when he attempted to conquer the surface world. Fuma is heir of the Hadou katana, a mystical sword with supernatural powers. He journeys to the depths of Hell in search of his missing brother.

Getsu Fuma wears an updated version of the apparel his ancestor, the first Fuma, wore a millennium ago. While receiving a notorious redesign, he retains most of his ancestor's characteristics, only differing in aesthetics which now follow a ukiyo-e art style.

Much like his ancestor, Fuma wears apparel that is heavily inspired by the traditional samurai armor, consisting of a metal cuirass featuring a demonic skull visage all over it and which is complemented by vambrace and gauntlets made of the same material, blue fauld with red cuisse worn over purple colored and patterned poleyn (pants), metal greaves and a diadem worn on the head which features a diamond/star-shaped, blue gem. A new addition is a horned demon-like skull worn over his left shoulder. Nevertheless, the most notorious addition is, without a doubt, that the demonic skull on his chest plate now seems to emanate purple magical energy from within, as if it were alive.

Like his predecessor, Fuma fashions long, red hair, which is reminiscent of those often seen on traditional kabuki actors, notorious for being very long, abundant and used in a loose style that usually covers a large portion of the body. 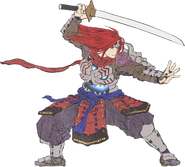 Getsu Fuma in the Undying Moon key artwork.
Add a photo to this gallery

This article is a stub. You can help the GetsuFumaDen Wiki by expanding it.
Retrieved from "https://getsufumaden.fandom.com/wiki/Getsu_Fuma_(Undying_Moon)?oldid=4368"
Community content is available under CC-BY-SA unless otherwise noted.