Konami Wai Wai World (コナミワイワイワールド, Konami Wai Wai Wārudo?) is a Konami mascot 2D platform game initially released for the Famicom game system in 1988. It stars Konami Man and Konami Lady as the main protagonists, and contains a series of stages inspired by several other Konami games, including GetsuFumaDen.

In this game, the player needs to rescue the mascot belonging to the game the current stage is inspired on. One of the heroes which must be rescued is Getsu Fuma. His world represents GetsuFumaDen and encompasses some areas inspired by locations of Raging Demon Island.

Ryukotsuki appears at the end of this stage as the main boss. She fashions an all new design than that from the original game, although keeping most of her characteristic features: huge demon dragon made entirely of bones and with limbs conformed by skulls, swipes with her claw in front of her, and has her weak point exposed within her rib cage (although this time it's the bulbous membrane on her neck instead of a core). Nonetheless, her main form of attack is very different; for starters, she's completely stationary this time around and attacks by releasing small versions of herself which pace back and forth along the ground while spewing two fireballs in a spreading manner and at different angles. If let to, Ryukotsuki can fill the screen with her offspring in a short time, making harder for the hero to maneuver among the myriad of fireballs filling the screen.

Once Ryukotsuki has been defeated, Getsu Fuma is freed and then joins Konami Man and the rest of the gang on their mission. He attacks by slashing with his trusty Hadou katana in front of him in an arcing pattern, just like in the original game, covering a wide area in front of him. However, this type of attack also forces him to get up and personal with the enemies, which naturally puts him on a higher risk than other characters that have more ranged attacks

A sequel to this game, called Wai Wai World 2: SOS!! Parsley Castle, was released for the Famicom in January 5, 1991. Its gameplay mechanics and overall character and graphical designs are quite different from the first game and the main protagonist is a character that goes by the name of Rickle. However, gameplay remains similar in essence, allowing the player to take control of a number of different Konami mascots to traverse the various levels in the game. 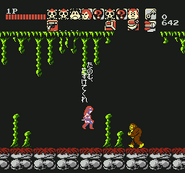 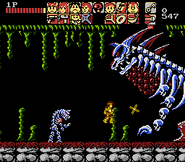 Simon Belmont fighting Ryukotsuki.
Add a photo to this gallery

Retrieved from "https://getsufumaden.fandom.com/wiki/Konami_Wai_Wai_World?oldid=4435"
Community content is available under CC-BY-SA unless otherwise noted.