The cover of the Winning Perfect Book. 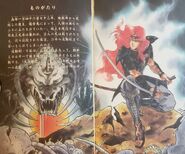 An example of the full-page splash art, featuring Ryukotsuki and Getsu Fuma.

The other of the two published strategy guides for GetsuFumaDen, this book lacks the full page pieces but in turn features simpler art for all enemies and bosses in the game alongside its strategies and guide information.

The cover of the Complete Peek Strategy Guide. 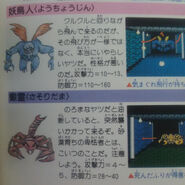 An example of the more simplistic individual enemy art.

GetsuFumaDen: Battle of the Dawn of the Demon Age[]

A common practice of the latter half of the 1980s was to put out Adventure Game Books, "choose-your-own-adventure" style novelizations of popular games, and GetsuFumaDen was no exception, receiving one in August of 1987, a month after the game's release.

The cover of the Adventure Game Book.

Keshi is the Japanese word for "eraser". In modern times, it refers to a collectible miniature figure, often of a manga or anime character, made of colored hard rubber. 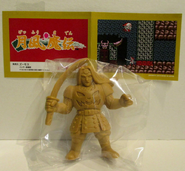 Getsu Fuma, still in the packaging, with pamphlet. 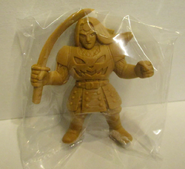 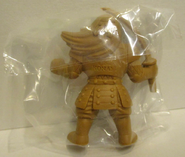 Getsu Fuma in a different color.

Another eraser, this time in the likeness of a small handheld game console, with an image of Getsu Fuma on the screen.

In 2018, a soundtrack for the original GetsuFumaDen was released on CD by Konami Digital Entertainment. 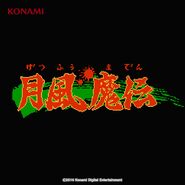 Album cover of the GetsuFumaDen Soundtrack.

In July of 2020, a licensed hoodie was released bearing the GetsuFumaDen logo on the front and a splash image of Getsu Fuma and his siblings raising the three Hadou katana aloft. 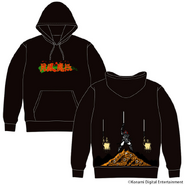 One of two guidebooks released covering the first of Konami's Wai Wai series of crossover games.

The cover of the adventure.

Konami Wai Wai World and Wai Wai World 2: SOS!! Parsley Castle received a dual soundtrack release covering both titles and featuring new art on the packaging. It has received a number of re-releases over the years across multiple formats. 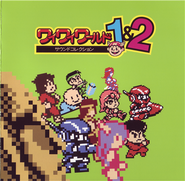 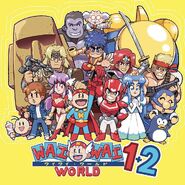 In 2011, Castlevania: Harmony of Despair received a soundtrack release that featured an arrangement of Go! Getsu Fuma used in its The Legend of Fuma DLC. 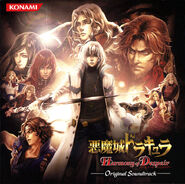 Otomedius Excellent came with different promotional materials in Japan and in the United States. 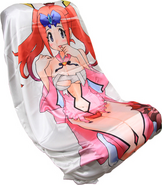 The English pillowcase featuring an ensemble of characters.

The Western Collector's Edition also came with a combination mini soundtrack and art book, featuring a selection of tracks and design works from the title.

Cover of the art book.

Inside cover, featuring the mini soundtrack cd and track listings.

Otomedius Excellent received an extensive five-disk soundtrack collection covering all the tracks in the game, including all those in the base game as well as those from DLC addons.

Outside cover of the collection.

The part of the collection covering GetsuFumaDen and Axelay tracks and arrangements.

As part of promotional materials, a combination package containing a branded hand-strap and a pin featuring Gesshi Hanafuuma was released.

As part of the early access promotion of GetsuFumaDen: Undying Moon on Steam, as well as coming with the "Digital Deluxe Edition", Konami included a Digital Art Book containing a selection of art and design works from the project.

The cover of the Digital Art Book.

In addition to the Digital Art Book, early access participants and "Digital Deluxe Edition" purchasers also gained access to a Digital Mini Soundtrack with a selection of tracks from Undying Moon.

Album art for the Digital Mini Soundtrack.
Community content is available under CC-BY-SA unless otherwise noted.