Otomedius Excellent (オトメディウスX: エクセレント！, Otomediusu X: Ekuserento!?) is an Xbox 360 horizontal scrolling shooter, part of the Otomedius series (which in turn is heavily inspired by the Gradius series), and the sequel to the 2008 game Otomedius Gorgeous by Konami for the same system. It was released on April 21, 2011 in Japan, and in North America on November 8 of the same year.

The game introduces Gesshi Hanafuuma,[1] a female playable character inspired by Getsu Fuma, the protagonist of GetsuFumaDen. Her spaceship is the Axelay Viper, which is inspired on the player's spaceship in Axelay (also from Konami). She was voiced by Satomi Satō.

The game also (re)introduces Ryukotsuki, who is the original main antagonist from GetsuFumaDen and sworn enemy of the Gesshi Clan, who has been resurrected by the Gofer Sisters to take advantage of her power; all this under the explanation that Ryukotsuki has to lend them her power in payment for having been resurrected by them. Keeping with the overall theme of the game, Ryukotsuki features a female humanoid body, which resembles her second form from GetsuFumaDen.

Gesshi Hanafuuma
Descendant and current heir of the Getsu Clan. Inspired by Getsu Fuma and representative of the GetsuFumaDen series.
(starting playable character) 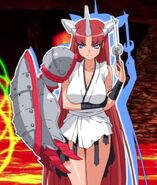 Ryukotsuki
The original Ryukotsuki who has been resurrected in the modern era and given a new body.
(boss)

Getsu Fuma
From GetsuFumaDen.
(DLC enemy)
Add a photo to this gallery 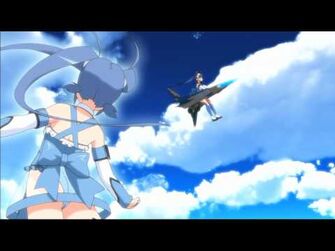 Otomedius Excellent - Opening trailer
Add a photo to this gallery

Retrieved from "https://getsufumaden.fandom.com/wiki/Otomedius_Excellent?oldid=4974"
Community content is available under CC-BY-SA unless otherwise noted.